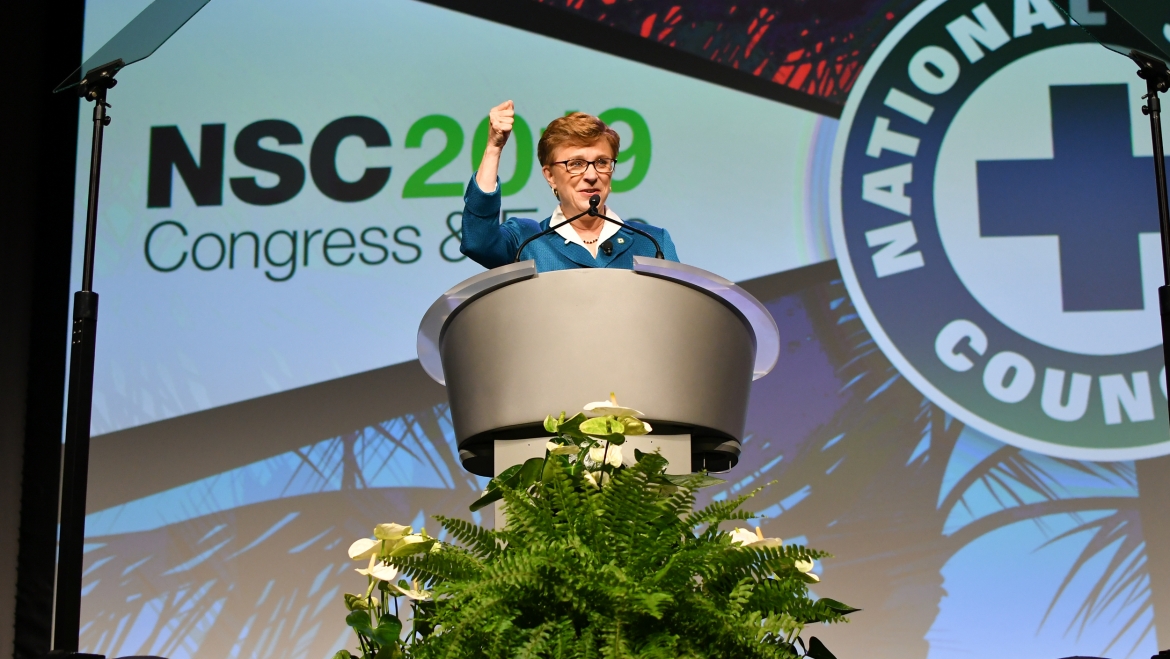 The past few months have been an exciting time for me as I’ve started my tenure with the National Safety Council. Just last month, I attended my first NSC Congress & Expo and truly experienced the expanse of what the Council does to help improve workplace safety – including the impressive efforts of Campbell Institute members, who are leaders around the world.

We were inspired by the Congress opening session keynote speaker, Mick Ebeling, who is passionate about the idea that nothing is truly impossible. He’s made it his life’s mission to make things “not impossible” by modifying technology for the sake of humanity and showing up to improve people’s lives. He believes, as I do, that any problem can be solved when we have the will and the leadership to show up and make it happen. Commit to solving the problem, then figure it out.

I have served in the Air Force and spent more than three decades in the aerospace industry at Lockheed Martin. I was proud to support and encourage diverse teams to reach new heights, including the crews that built C130 cargo planes and F-35 fighter jets.

With every challenge I’ve undertaken, from building complex computer systems and fighter jets to overseeing a major acquisition and working to establish a successful workplace culture, I have strived to be both an asset and an advocate for the people around me so we can move forward with maximum focus and impact. In my view, leadership means showing up and never leaving your people behind. That’s what good leaders do, and that’s what safety leaders around the world aim to do every single day. Safety leaders are trusted to have employees’ backs when it comes to safety – identifying risk, reducing injuries, preventing fatalities and ensuring more workers go home to their families.

I’m an engineer by training, and if there is one thing engineers love most, it’s a good challenge. In 1994, the American Society of Civil Engineers named the Golden Gate Bridge in San Francisco one of the seven wonders of the modern world. Yet when the bridge was but a dream a century before, it was called something else – the Impossible Bridge.

Chief engineer Joseph Strauss took on the challenge that others deemed impossible due to the treacherous waters, winds and conditions in the Golden Gate Strait. Leaders who take on the impossible aren’t blind to failure, they just show up anyway, employing novel solutions with the right expertise, the right tools and a diversity of ideas.

In the 1930s, for every million dollars spent on a major construction project like this one, one worker would be expected to perish. Strauss wanted to ensure that deadly ratio wasn’t part of the equation in building the $35 million icon.

He introduced worker protections we take for granted today: the prototype of the modern hard hat, glare-free goggles and wind-protection for workers who risked their lives working hundreds of feet above the water. Why? Because that’s what safety leaders do.

One of the very first construction safety nets protected workers in case of a fall by spanning the bridge from end to end. It saved 19 workers, who became known as the “halfway to hell club.” For three years of construction, the Golden Gate had the best safety record of any large bridge. Though, as safety leaders know, your safety record is only as good as your last incident.

On the morning of Feb. 17, 1937, workers were removing temporary scaffolding underneath the bridge when a 5-ton work platform fell into the safety net. Ten men did not survive, and two were rescued from the water.

At the time, the reduction in lives lost as the construction of the Golden Gate Bridge was finalized demonstrated progress for worker safety. But today, everyone would acknowledge that even one life lost is too many.

Since the Golden Gate Bridge was built, we have learned so much about risk and precaution, yet construction is still one of the most dangerous occupations out there. In fact, one out of every five workplace fatalities is in construction. Many other industries also face serious challenges when it comes to safety, so our commitment to eliminating preventable deaths remains as strong as ever.

The C-5 cargo plane is the biggest plane in the U.S. military inventory, and after 40 years in operation, it was undergoing a renovation. The C-5 needs a lot of fuel to carry its heavy cargo long distances, and the wings are also the fuel tanks.

It is hard for those who work inside to access the fuel tanks, and even after the fuel is siphoned off, the tanks still give off fumes. Our mechanics were having a hard time fixing the fasteners inside these fuel tanks. They were on their backs for hours and the work was slow.

It’s a leader’s job to show up to see what we ask of our people, and to learn what is in their way. So I realized the best thing I could do was to see it for myself. I said, “Give me the suit. Let me see what you’re working with,” and I climbed into the fuel tank. Being there and seeing it for myself made me realize we could engineer our tools better for our mechanics – and we did just that.

We may not all be building impossible bridges, but by showing up when employees have challenges, we can go beyond just patching things up. We can get to the root cause and make a real impact.

For a long time, my mantra has been, “Every commitment, every day.” I know that safety professionals live by a similar code. We already ask so much of our employees. We ask them to be efficient, to learn new ways of doing things and to look out for the latest hazards.

We cannot ask them to accept an environment where they could be injured or killed on the job. We must do what needs to be done to ensure people are able to live their fullest lives.

I challenge all safety professionals to consider: What kind of a leader are you going to be? Re-examine your definition of what’s possible. Create the change you want to see by showing up for the people around you. I look forward to more opportunities to learn and experience the Council’s work in action and find new ways we can support our people. We have a great wealth of knowledge in our Campbell Institute membership that we can leverage to make sure our efforts have the highest impact on eliminating preventable deaths. Together, we can make the impossible possible, from the workplace to anyplace.